If you are going to endure years — no, generations — of futility and heartbreak, when you do finally win a World Series championship, it may as well be a memorable one.

The Chicago Cubs did just that, shattering their 108-year championship drought in epic fashion: with an 8-7, 10-inning victory over the Cleveland Indians in Game 7, which began on Wednesday night, carried into Thursday morning and seemed to end all too soon.

When the Indians rallied with three runs in the eighth inning — including a two-out, two-strike, two-run thunderbolt of a home run by Rajai Davis off closer Aroldis Chapman — the Cubs found a way to beat back the ghosts of playoffs past.

After a brief rain delay following the ninth inning, they pushed two runs across in the 10th inning on a double by Ben Zobrist, the Series’s most valuable player, and a single by Miguel Montero.

The Cubs then had to hold their breath in the bottom of the inning when Davis hit a run-scoring single to pull the Indians to a run behind. But reliever Mike Montgomery replaced Carl Edwards and got Michael Martinez to hit a slow roller into the infield. Third baseman Kris Bryant scooped it up and threw across to first baseman Anthony Rizzo.

This is just the lift our country needed. I’m not a big sports fan but I sure did enjoy that game last night, right here in my house, all…

I don’t own a television, and some of the rules of the game (like that out called on the attempted bunt) were new to me, but even I stopped…

As a born and bred Chicagoan:While it worked out in the end, I think the Cubs should have wrapped it up in nine innings. I question two of…

As the ball made its flight across the diamond, the stadium went silent for one of only a few times all night — and only until it settled into Rizzo’s glove. Then the huge contingent of Cubs fans erupted, and the players raced to the middle of the infield to celebrate.

“We’re world champions,” Rizzo said in the alcohol-soaked visitors’ clubhouse after he had taken a break from embracing the actor Bill Murray. “The Chicago Cubs are world champions. Let that sink in.”

Thousands of fans lingered for nearly an hour after the game, moving into the field level of the stadium, waving the ubiquitous W flags, singing the victory anthem “Go Cubs Go” and roaring when Rizzo held up the ball he had caught for the final out.

That sleep will no longer be tortured by old memories — of collapses in 1969, 1984 and 2003, and talk of curses of black cats, billy goats and Steve Bartman, the fan who infamously interfered with a foul ball in the playoffs.

“If you want to believe in that kind of stuff, it’s going to hold you back for a long time,” Cubs Manager Joe Maddon said. “I love tradition. I think tradition is worth time mentally, and tradition is worth being upheld. But curses and superstitions are not.”

On Wednesday night, the Cubs did not so much beat the Indians as survive them.

The heart-stopping end to the series — and the 108-year wait — carried with it an additional historical perk. The Cubs became the first team to rally from a three-games-to-one Series deficit since Kansas City did so in 1985 and the first to do it on the road since Pittsburgh in 1979.

Meanwhile, in this matchup of long-suffering franchises, the Indians’ suffering will carry on longer. They have not won since 1948 — and the excruciating way in which they suffered the defeat, with three consecutive losses — will take its place atop a list that until now was topped by the 1997 World Series, in which the Indians lost a ninth-inning lead, and eventually the Series, to Florida.

When the Indians retreated to their clubhouse during the rain delay, lockers were covered in plastic and Champagne was made ready. 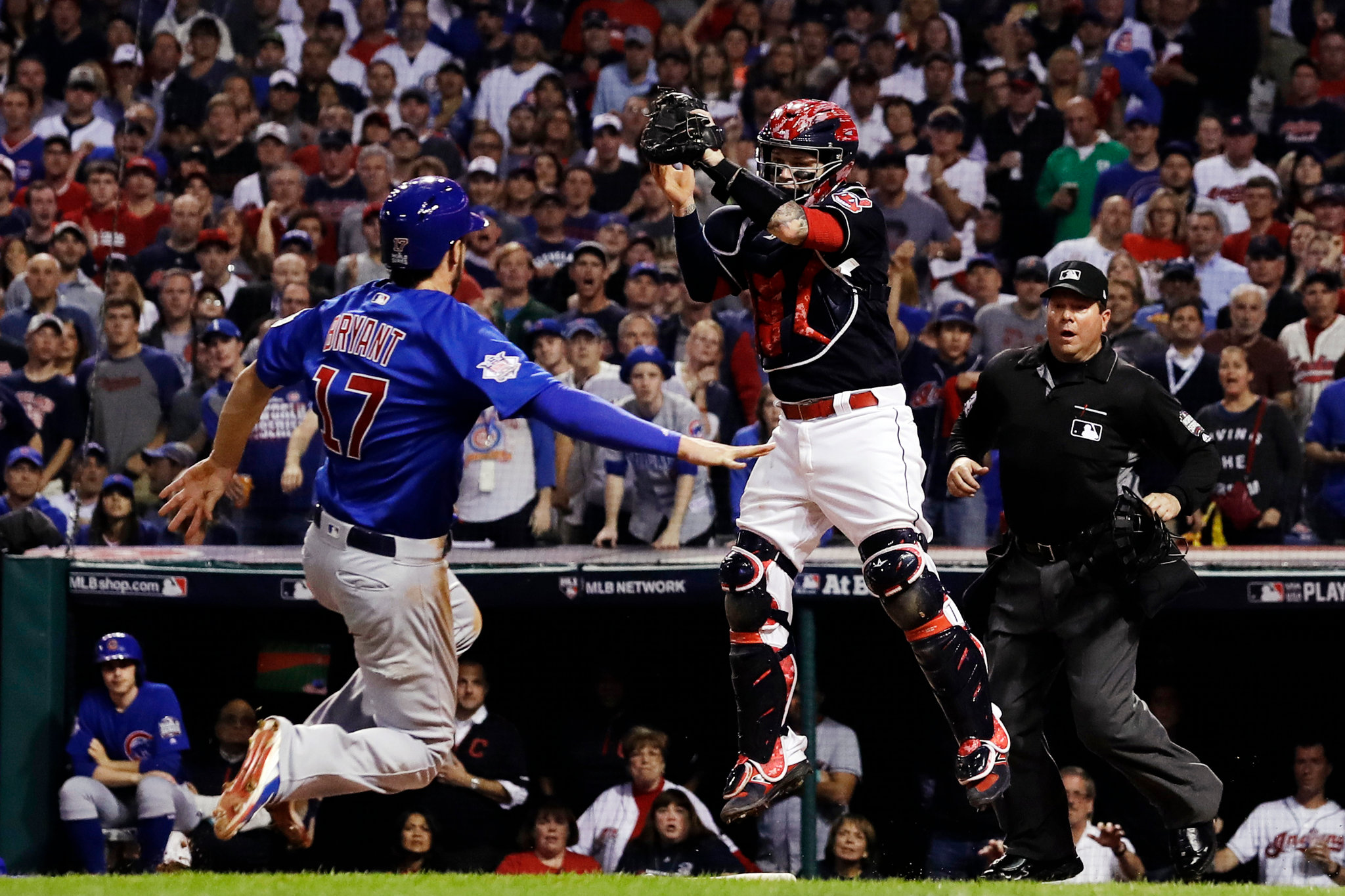 Kris Bryant beat a throw to Indians catcher Roberto Perez in the fourth inning, scoring to give the Cubs a 2-1 lead. The Cubs were the first team since 1985 to rally from a three-games-to-one deficit.CreditMatt Slocum/Associated Press

“It’s going to hurt,” said Indians Manager Terry Francona, who called it an incredible game. “It hurts because we care, but they need to walk with their head held high because they left nothing on the field. And that’s all the things we ever ask them to do. They tried until there was nothing left.”

The Indians had overcome all season — the 24th-highest payroll in baseball was dented by injuries to outfielder Michael Brantley and pitchers Danny Salazar and Carlos Carrasco and the loss of two players to drug suspensions — and they fought uphill all night, never taking the lead on Wednesday.

To win, the Cubs beat two of the most dominant pitchers in this postseason — the Indians’ ace, Corey Kluber, and their versatile reliever Andrew Miller — who gave up more runs on Wednesday than they had allowed in the entire postseason. They then had to bounce back after Davis’s home run.

The roller coaster of a game took place in an unusually neutral environment, with so many of the Cubs’ passionate and well-heeled fans finding their way into the stadium. The crowd of 38,104 was evenly split, and the two groups of fans spent the evening alternating full-throated roars, robbing the environment of any lulls. Not even the 17-minute rain delay affected their spirits.

They were the latest to witness the Cubs, who won 103 games in the regular season — the most in baseball — showing their mettle during the playoffs.

They rallied from four runs down in the ninth inning to eliminate San Francisco, which had won 10 consecutive elimination games. After being shut out for 21 consecutive innings by Los Angeles in the National League Championship Series, they rebounded to win three in a row — beating Clayton Kershaw in the clincher.

When the Cubs went to Wrigley Field on Sunday knowing they would have to win three in a row, Rizzo lightened the mood. He arranged for the “Rocky” movies to be played on all of the televisions in the clubhouse and then shadowboxed around the room while half dressed.

Rizzo’s message: The Series was going the distance.

“It was like a heavyweight fight, man,” Zobrist said. “Just blow for blow, everybody playing their heart out. The Indians never gave up, either, and I can’t believe we’re finally standing, after 108 years, finally able to hoist the trophy.”

When the rain delay took effect after the ninth inning, Jason Heyward convened a player meeting in the weight room. He reminded everyone to forget about what had transpired and said that they would find a way to win.

“Everyone was fired up, and I didn’t expect that,” Montgomery said. “I expected everyone to be frustrated, down on themselves, down on the team. We just blew a three-run lead in the eighth inning with two outs. The next thing I know, everyone’s like, ‘We got this.’”

When the tarp was removed from the field, Kyle Schwarber began the 10th with a single to right off reliever Bryan Shaw, and Albert Almora pinch-ran for him. Bryant, who had homered in the previous two games, drove a ball deep to center that Davis caught on the warning track. It was far enough to allow Almora to tag up and take second. Shaw then walked Rizzo intentionally.

Zobrist sliced a two-strike pitch for a double into the left-field corner, scoring Almora and sending Rizzo to third, and the usually composed Zobrist pumped his fists wildly and screamed as he arrived at second base ahead of the throw.

After Addison Russell was intentionally walked, Montero followed with a single that brought home Rizzo. The runs took Chapman — who had gotten the final eight outs and thrown 42 pitches on Sunday to keep the Cubs alive — off the hook.

The drama, however, was not.

When he replaced Jon Lester in the eighth, with a runner at first and two outs, it was quickly apparent that he was spent. He allowed a run-scoring double to Brandon Guyer before Davis hit his two-run homer. The lead that the Cubs had built largely on the legs of home runs by Dexter Fowler, Baez and David Ross — the 39-year-old catcher who had said he would retire after the game — was gone.