WhatsApp is imposing 24-hour lock-outs on people trying to access its service via an unauthorised Android app.

The Facebook-owned messaging service said that it had acted against users of WhatsApp Plus because of concerns that the program might cause private data to be leaked to third-parties.

Experts say Android users should be cautious about where they download apps from.

WhatsApp recently reported it had 700 million users sending an average of 30 billion messages a day. It currently charges a $0.99 (65p) annual fee to users who sign up to the service after their first 12 months of using it.

“Our goal is always to keep WhatsApp fast and secure for the people who use it – it’s the most important thing we do,” said a spokesman for the firm.

“Third-parties that have built unauthorised functionality on top of WhatsApp create issues for people including lost messages.

“This goes against the experience we work hard to give people and we won’t let it continue. Starting today, we are taking aggressive action against unauthorised apps and alerting the people who use them.”

The effort coincides with the introduction of the ability to access WhatsApp from the Google Chrome web browser, as an alternative to the app. This will not, however, work on Apple’s iPhones or iPads.

According to one app store, WhatsApp Plus had itself been downloaded more than 35 million times since its 2012 releases by a Spanish developer, who called himself Rafalense.

Security consultant Graham Cluley said that figure sounded “surprisingly high”, but acknowledged there was no independent way to verify it.

WhatsApp Plus’ own website appears to be offline at this time.

But the moderator of a development community, which had supported it, used Google Plus to indicate that work on the software would now be put on hold.

“We have received a cease and desist letter from WhatsApp and we are obligated to remove all download links and unfortunately delete this community,” he wrote.

“[I] am really sorry for this but it’s out of our hands and WhatsApp has pushed us into a corner that we can’t escape this time. It was a fun ride but it has come to an end.

“Deepest regards from Rafalense and me and all the WhatsApp Plus team for your support.”

Twenty-four hour bansWhatsApp Plus offers a way to use colours and background images in chat conversations that are unavailable in the official app.

In addition, it allows users to increase the size limit on attached video and sound files and also lets them prevent others being able to see when they last logged into the service – a feature it used to charge a “donation” to unlock.

To access the features, smartphone owners must first uninstall the official WhatsApp app if it is already on their handsets. 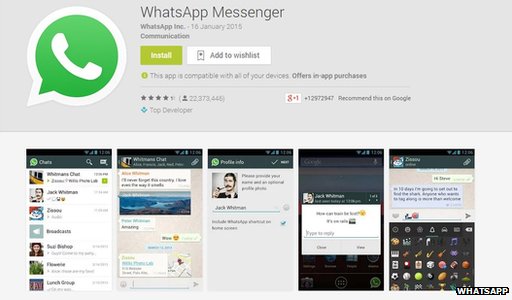 Facebook is in turn urging people using WhatsApp Plus to delete it and install the official app via Google’s Play store. However, even if they do so, they are told they cannot access the service for further 24 hours because they violated its terms and conditions.

‘Maintaining control’WhatsApp Plus was not available from Google Play – the Android developer’s own store – but was promoted on several smaller alternatives.

“People should be careful about third-party stores,” commented Dr Joss Wright from the Oxford Internet Institute.

“There are levels of quality control that are implemented by Google, which withdraws apps that are detected as being not completely legitimate, and indeed by Apple, which is incredibly restrictive about what it allows on the iOS store.

“Such apps could bring with them security bugs.”

But he added that Facebook also had other incentives to stop independent apps latching onto its WhatsApp platform.

“That could potentially prevent it from adding services later for an added cost,” he said.

“Or if it wants to add adverts later and ensure they are being served to the people who should be seeing them, then that it needs to maintain control and prevent the rules that it has set from being bypassed by third-party clients.”

Posted by: @GhanaGist
View more posts
Tags:WhatsApp Plus
WhatsApp Plus users suspended by official app for 24 hours 0 out of 5 based on 0 ratings. 0 user reviews.
KKD appears before Magistrate court today
Stop cocaine trade in Ghana | Watch how Ghanaians in Berlin protested against President John Mahama