Dancehall artiste Shatta Wale is calling on his fans to remain calm as the Police interrogate his manager, Bulldog concerning the death of Kwaw Kese’s manager, Fennec Okyere.

His manager, Lawrence Nana Asiama Hanson popularly known as Bulldog was picked up by the Police Criminal Investigation Department (CID) on Thursday in Kokomlemle, a suburb of Accra, as a prime suspect in the death of Fennec Okyere.

Shatted posted the message below on his Facebook wall to counsel their numerous fans to keep calm and allow the Police to do their work.

“I know the luv u all have for the shatta movement crew.Lets all keep calm and let the police do their work.we hope everything goes well with this loyal and Great manager I have ever worked with Bull Dog.” 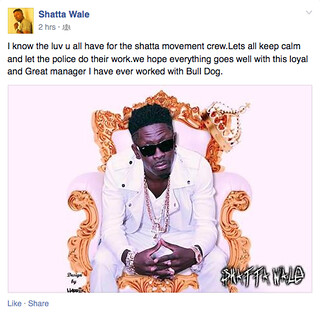 The moment Beyoncé fans have been waiting for is finally here: The 24-time Grammy Award-winning queen of…