The prayers of millions of P-Sqaure fans have been answered, Peter Okoye one half of the P-Square pop duo has finally reconciled with his family.

Peter, Paul and Jude Okoye all tweeted their message of re-union almost at the same time in the early hours of Friday morning. 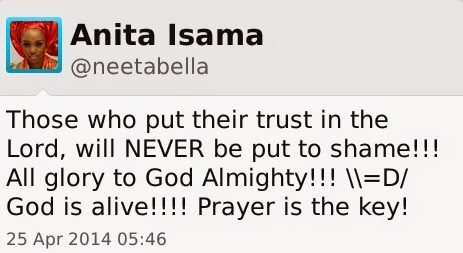 Vanguard reported yesterday, that Peter had given his family condition for peace which was to accept and respect Lola; his wife and mother of his two children.

For a week, news of a possible split of the singing duo gripped their fans across the globe, who flocked to their social media pages begging and praying that the brothers remain together.

Also as at yesterday, close friends had intensified efforts in resolving the crisis which had thankfully paid off.

The pop duo’s elder brother and manager Jude Engees Okoye on April 18, exposed the crisis rocking the family on twitter with his infamouse tweet. Since then the twins went silent and underground as the storm raged.

Peter reportedly gave condition for peace, saying his wife, Lola, must be accepted and respected by the family or risk total isolation from him.
Several sources contacted by Vanguard confirmed that this was his only condition for peace.

Peter of P-Square shuts down fighting rumour with Paul

Peter Okoye, a member of the P-Square duo who was in Ghana for ‘Dance with Peter’…