No comments
The Country Music Association Awards, theoretically a joyful night that celebrates country singers, had a common theme this year: tears.

Miranda Lambert wiped her eyes at the end of the show’s emotional opener, which featured a medley of classic country songs that culminated in a singalong of “Forever and Ever, Amen” with Randy Travis, who suffered a near-fatal stroke three years ago. Thomas Rhett said he and Garth Brooks cried together during that performance. Songwriter Lori McKenna broke down when she won song of the year for Tim McGraw’s “Humble and Kind.”

Carrie Underwood and Maren Morris sobbed as they picked up their trophies for female vocalist and new artist, respectively. John Osborne wept when he accepted the prize for vocal duo of the year with his brother, TJ, who was trying not to cry. Kenny Chesney looked a little teary during his Pinnacle Award speech. Even Dolly Parton could barely keep it together after a group of female country singers paid tribute to her most famous songs.

“I would have cried, but I didn’t want to mess up my eyelashes,” Parton said. “I was doing my best!”

The people who should have been in tears were the producers, given that an incredibly tense World Series Game 7 was happening over on Fox, stealing many viewers. But despite the serious TV competition, this was one of the most entertaining CMA Awards in recent memory. A complete list of winners and nominees are below; here’s a rundown of the best and worst moments.

The CMA producers promised the night would be stacked with legendary singers, given that it was the 50th anniversary of the show. They delivered in the opening minutes with Vince Gill; Roy Clark; Charley Pride, Alabama; Charlie Daniels; Reba, Dwight Yoakam; Clint Black; Ricky Skaggs; and Alan Jackson, singing their greatest hits. And don’t even get us started on that aforementioned Travis moment or we’ll start crying again.

* Beyoncé and the Dixie Chicks.

The CMAs are made for crossover performances, and Beyoncé and the Dixie Chicks played off each other’s energy as they sang “Daddy Lessons,” a country-inspired track from Beyoncé’s “Lemonade” album that the Chicks played on tour all summer. It was a triumphant return for the trio members, who have been a scarce presence in country music in the last decade, thanks to the Natalie Maines-George W. Bush comment controversy. 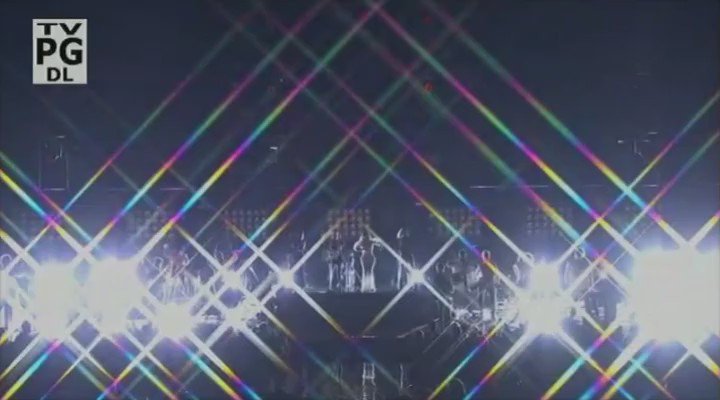 You have to give the co-hosts credit for their commitment to the bit. Much of their monologue was devoted to the endless presidential election, with a “This election is taking forever and ever, amen,” joke, playing off Travis’s famous song. Paisley also did his best Donald Trump impression, leaning into the microphone to say “WRONG” or “LIES” as Underwood talked, and then declared the show rigged. And yes, there were “basket of deplorables” and “nasty woman” jokes, too.

As country music writer Grady Smith pointed out, Morris — the 26-year-old Texas breakout artist who made a splash this year — got a huge sales bump from the show, with her debut album spiking to No. 2 on iTunes. That’s likely the result of a riveting performance of her debut hit single “My Church,” along with the Preservation Hall Jazz Band and the McCrary Sisters, which also shot up iTunes.

She also won new artist of the year: “Y’all, I can’t win this award after performing. I’m gonna fall apart,” Morris said to the crowd, in tears. “Last year, I sat across the street at a bar and watched this show. I never thought as a songwriter I’d be standing here today.” A mash-up of “Remember When” and “Troubadour” was something we never knew we needed until this show — and the country stars rocking out in the audience, from Lady Antebellum to Eric Paslay, seemed to agree. 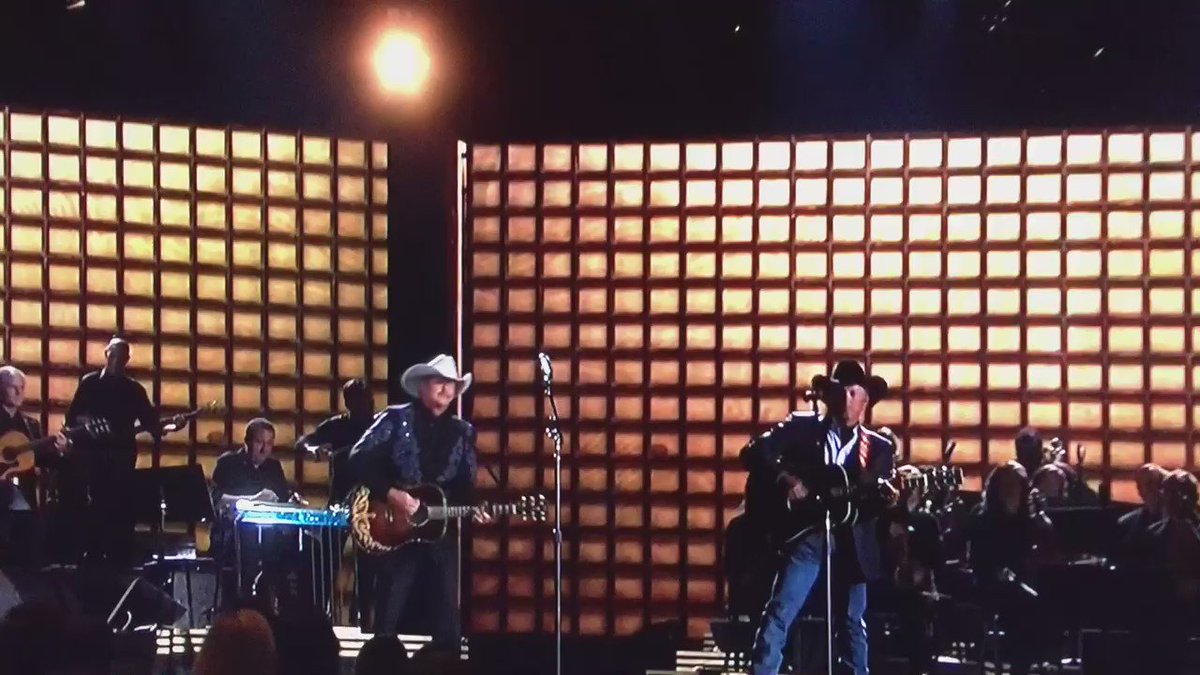 George Strait and Alan Jackson though, had me all emotional. I love Troubadour

Jennifer Nettles, Kacey Musgraves, Martina McBride and Carrie Underwood perfected this medley (along with a cappella group Pentatonix), with “9 to 5,” “Jolene,” “Here You Come Again” and a group version of “I Will Always Love You.” 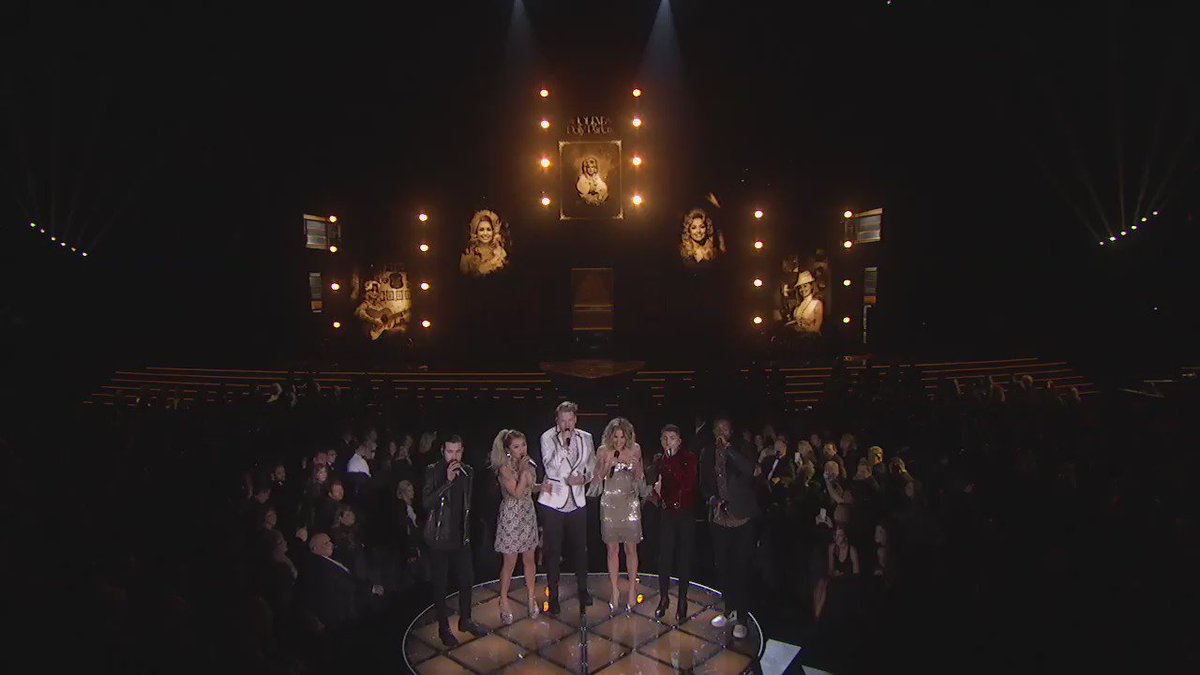 The much-loved Chris Stapleton took home two awards (male vocalist and music video), which was the most of anyone; the other prizes were pretty varied. While unstoppable Florida Georgia Line could have feasibly won the vocal duo of the year trophy until the end of time, acclaimed Maryland sibling duo Brothers Osborne shocked the room when they were awarded the prize. No one was more surprised than they were.

Someone thought it was a good idea for Paisley and Underwood to have an extended sequence where they played (again!) with McGraw and Hill Barbie dolls, and then made jokes about the star couple’s special alone time on the bus when they go on tour together next year. Does anyone really find this bit funny?

Obviously singers want to plug their latest songs on a national stage. But can’t they try something different? Thomas Rhett’s smash “Die a Happy Man” is pretty old at this point. Tim McGraw’s “Humble and Kind” is very moving, but he basically did the same performance at the ACMs in April. And there should be a law against Keith Urban playing ballads on live TV (even his latest hit, “Blue Ain’t Your Color”), given his guitar skills with upbeat songs. After Stapleton and Yoakam’s captivating duet of Ray Charles and Willie Nelson’s “Seven Spanish Angels,” it was almost unfair to have Luke Bryan perform his forgettable party-centric single, “Move.” * The producer who told Dolly Parton to wrap it up.

The singer clearly had more to say when accepting her Willie Nelson Lifetime Achievement award — and even if it was just more jokes about how it was a “high” honor, that would have been just fine.