Pop star Madonna fell off the stage during her performance at the 2015 Brit Awards, on a night that saw Sam Smith and Ed Sheeran each win two prizes.

Madonna tumbled down a set of stairs and landed awkwardly, apparently after a dancer tried to remove a cape she was wearing at the start of her routine.

But she recovered and returned to continue her song, Living For Love.

The 56-year-old issued a statement later saying she was “fine” and that her cape had been “tied too tight”.

“Nothing can stop me and love really lifted me up,” she wrote on Instagram, referencing the lyrics to her song. “Thanks for your good wishes!” 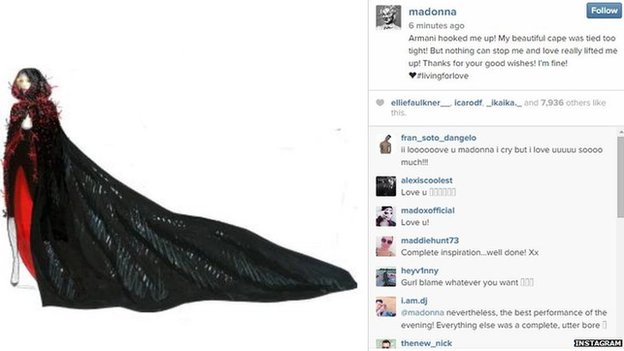 Read coverage of the ceremony as it happened.

The painful incident came at the end of a ceremony where Ed Sheeran and Sam Smith shared the honours, winning two awards each.

An average of 5.3 million people tuned in to the ceremony on ITV, according to overnight ratings – rising to 5.8 million when ITV+1 viewers are added in.

John Hand, BBC News
Well, sitting way up in the balcony seats among some of Madonna’s biggest fans – the type who know and sing along with every lyric – the initial thought was that it may have been a particularly well orchestrated dance manoeuvre.You may have wondered why there was no gasp of shock from the O2 crowd as Madonna took her backward tumble.

Consider the evidence – she fell on the lyric “I let down my guard, I fell into your arms” and was back on her feet to sing purposely “now that it’s over, I’m going to carry on”.

The truth later emerged but credit to the showbiz trooper for carrying on. In the words of those other Brit Award history-makers Chumbawamba “I get knocked down but I get up again”.

Sheeran scooped the night’s main prize, album of the year, for his record X – which was the best-selling record of 2014 in the UK.

“I was really worried abut this album,” he said, accepting his trophy from actor Russell Crowe. “It took a long time to make.”

The star added it had been a “very, very good year for British music”.

“I don’t think a statue gives justification of people’s success,” he continued. 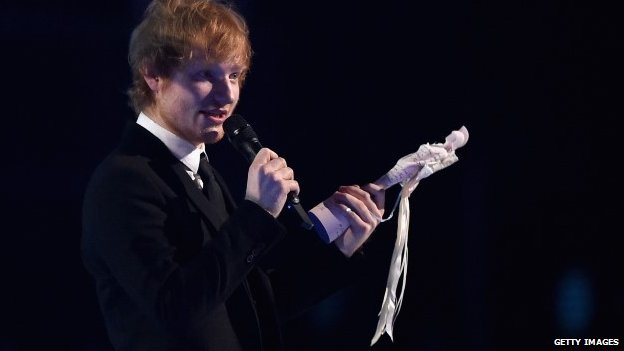 The singer, who won four Grammys earlier this month, thanked his fans in an emotional speech.

“Since I was a little kid I dreamed of people all over the world singing my songs and although I’ve got a long way to go, this shows that I’m stepping in the right direction.”

She went on to win best international female, her first award after eight years of releasing records in the UK.

“I started out playing King’s College [in London] and eight years later I’m getting ready to play Hyde Park,” she said backstage. “It’s like… what?”

The star dedicated her award to Sheeran, a close friend, who fanned the flames of her love affair with the UK by “taking me to pubs and showing me how to make a proper cup of tea.”

Both acknowledged their slow-building success in their speeches.

“Oh my god, wow,” said Swift. “I’ve been coming to England and playing shows for eight years and this is my first Brit Award, I’m so happy.” 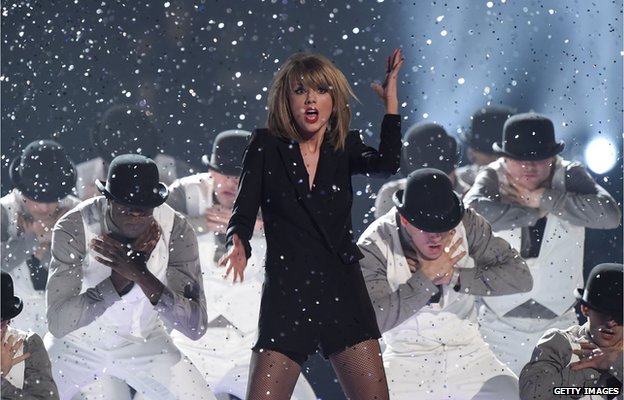 “This has been 13 years in the making and I’m going to gob off a bit,” she told the audience at London’s O2 Arena.

She revealed she’d “been arrested twice” for fly posting in Hackney when she was a young artist, but could now see her face on posters at the tube station outside the venue.

Faith’s third album, A Perfect Contradiction, was the biggest-selling female record in the last year, shifting more than 725,000 copies.

She also gave one of the night’s more elaborate performances, singing Only Love Can Hurt Like This under a streaming waterfall.

The band also performed at the show, alongside George Ezra and Kanye West, who premiered a new song All Day, which had to be heavily censored by ITV.

But the critics have lost perspective: The artists rewarded at the Brits are usually the ones the public have fallen in love with, for better or worse.

Sam Smith’s Stay With Me is already a standard; while Ed Sheeran’s Thinking Out Loud will soundtrack weddings for years to come.

As Lionel Richie said on the red carpet, “these songs will last the rest of your life”.

So, yes, the Brits are more populist than the Mercury Prize or the NME Awards, but as the industry’s main awards night, it seems right that commercial success is the ceremony’s barometer.

Although I’m sure the organisers would love to erase Steps victory in 2000’s “best live act” category from history.