Bill Cosby was done being quiet.

The TV icon did not testify in his criminal trial in a Norristown, Pennsylvania, courthouse, and he sat silently through more than two weeks of emotional testimony from witnesses and fierce cross-examination from his attorneys.
He didn’t visibly react when the jury found him guilty on three counts of aggravated indecent assault. But minutes later, prosecutors asked the judge to revoke Cosby’s bail because, they said, he had a private plane and might skip town. Cosby erupted.
“He doesn’t have a plane, you asshole,” Cosby boomed, referring to himself in the third person.
The outburst punctuated a stunning day in history — or “herstory,” as attorney Gloria Allred put it. The trial ended with the first, second and third guilty verdict against a celebrity accused of sexual assault since the start of the #MeToo movement, signaling the movement’s power inside the courtroom.
That moment had been years in the making. The path toward it began in Cosby’s home 14 years ago, and wound its way through a civil settlement, a comedian’s standup act, dozens of courageous women’s testimonials, and a mistrial. 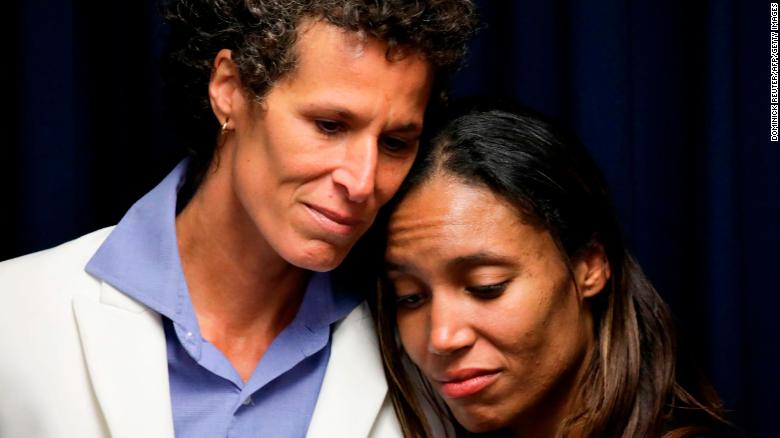 Andrea Constand, left, and prosecutor Kristen Feden during the final day of Bill Cosby’s retrial.
One night in January 2004, a Temple University women’s basketball employee named Andrea Constand visited Cosby’s home outside Philadelphia to ask for career advice.
She had been stressed, she told him, so he offered her three blue pills that he said would calm her.
“These are your friends, they will take the edge off,” he said, according to her testimony.
She testified that she saw the famed comedian and Temple trustee as a mentor. So she took the pills. Shortly after, she began to feel woozy and slur her words, she testified. Cosby guided her to a couch as she slipped in and out of consciousness.
“The next thing I recall is, um, I was kind of jolted awake, and felt Mr. Cosby on the couch beside me, behind me, and my vagina was being penetrated quite forcefully,” Constand testified. “I felt my breasts being touched, and he took my hand and placed my hand on his penis and masturbated himself with my hand.”
She testified that she felt incapacitated and couldn’t fight back.
“I wanted it to stop. I couldn’t say anything,” she said. “I was trying to get my hands to move, my legs to move, and the message just wasn’t getting there. I was weak, I was limp and I couldn’t fight him off.”

Constand quit her job at Temple soon after, and moved back home to her native Canada. But after more than a year of sleepless nights, she went to police and told them Cosby had assaulted her.
Montgomery County prosecutors at the time declined to file charges against Cosby. She then sued him in civil court, and the two reached a settlement in 2006 for $3.38 million. Cosby did not admit any wrongdoing in the case.
He did, however, give a deposition in which he admitted that he had obtained Quaaludes, the powerful sedative drugs, to give to women he wanted to have sex with in the past.
That deposition would remain secret for almost a decade. And without criminal charges, the story faded away. Cosby resumed his role as one of the most beloved and iconic celebrities in the world — a man affectionately known as “America’s Dad” for his portrayal of the sweater-loving Cliff Huxtable on “The Cosby Show,” one of the first mainstream TV shows to feature a black upper-middle class family.

In 2014, comedian Hannibal Buress performed a routine contrasting Cosby’s moral stances with the allegations against him.
“Google ‘Bill Cosby rape,'” he told the audience. Video of the act went viral, and as more people learned about the allegations of sexual misconduct, more women bravely came forward with their own horrific stories.
More than 50 women spoke out against Cosby, many with remarkably similar stories about his alleged actions decades ago: He gave them drugs, they became incapacitated, and he assaulted them, they said. He strongly denied the allegations, and accused the women of making up the stories.
As pressure on Cosby mounted, a judge decided to publicly release the deposition in which he spoke of his use of Quaaludes. That deposition was key to the Montgomery County prosecutor’s decision to reopen the case and file criminal charges against Cosby in December 2015 — just a month before the statute of limitations in Constand’s case expired.
The first criminal trial against Cosby last year ended in a hung jury and a mistrial. But the rise of the #MeToo movement last fall created a cultural shift, one that many observers believed would make the second trial different from the first.
At this second trial, Constand’s testimony was bolstered by five other women who also said Cosby drugged and assaulted them in previous incidents. Prosecutors said these “prior bad acts” witnesses showed that Cosby’s actions toward Constand were part of a pattern and not a one-time mistake. 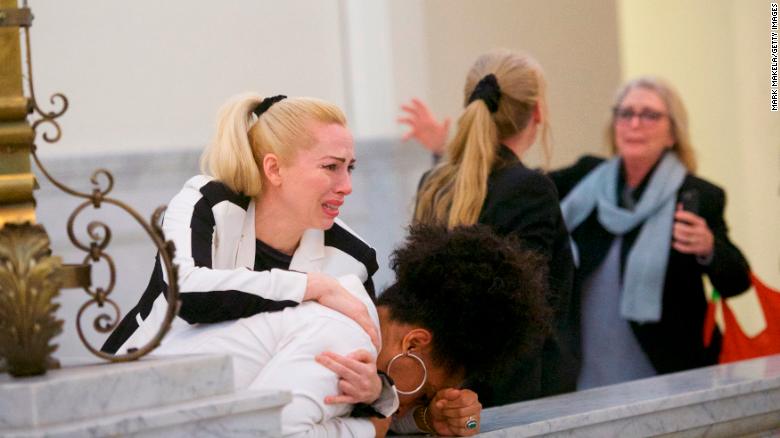 Bill Cosby accusers Caroline Heldman, left, Lili Bernard, second from left, and Victoria Valentino, far right, react after the verdict was delivered.
Guilty. Guilty. Guilty.
That shocking verdict caused a loud reaction from Lili Bernard, who accused Cosby of assault and has been at both trials. She and several other women went out into the courtroom hallway, embracing and crying tears of joy.
They did not testify in the criminal trial against Cosby. But the verdict spoke directly to their experiences, they said.
“I feel like I’m dreaming,” Bernard said outside the courthouse on Thursday. “I feel like my faith in humanity is restored.”
“Today this jury has shown that what the MeToo movement has (been) saying is that women are worthy of being believed. And I thank the jury. I thank the prosecution,” she added.
Victoria Valentino, who has accused Cosby of raping her in the 1960s, said the verdict vindicated her and all the women who have spoken out.
“We are vindicated. We are validated, and we are now part of the tsunami of women’s power and justice.”
“We are not shutting up,” Valentino said, “and we’re not going away. Get over it.”
Gloria Allred, the famed women’s rights attorney who represents women suing Cosby, said this was the happiest she had been in 42 years.
“We are so happy that, finally, we can say women are believed. And not only on #MeToo, but in a court of law where they are under oath, where they testified truthfully, where they are attacked,” Allred said. “After all is said and done, women were finally believed.”

Cosby can’t leave his Pennsylvania home and will be fitted with a GPS monitor, according to a bail order released Friday.
His attorney, Tom Mesereau, said Thursday he plans to appeal “very strongly.”
“We are very disappointed by the verdict. We don’t think Mr. Cosby’s guilty of anything, and the fight is not over,” he said.
Amid all that talk outside the courthouse, Cosby did not speak. He cursed in court, then went silent.
The jarring contrast between his profanity and his beloved persona was evidence that the comedian was never the man he portrayed himself to be, Montgomery County prosecutor Kevin Steele said.
“I guess you got to see a brief view of who he was,” Steele said. “I think everybody got to see who he really is when each of those prior bad act witnesses got to testify. The guy was an actor for a long time.”
“And it was an act,” he said. “It was an act.”