Michael Douglas thanked his Behind The Candelabra co-star Matt Damon: “I can tell you, you were magnificent and the only reason I am standing here is because of you, so really you deserve half of this”

The Liberace biopic Behind the Candelabra has taken the top honours at this year’s Emmy awards, held in Los Angeles on Sunday.

The film, shown on the cable network HBO in the US, won three awards including best TV movie and a best actor award for Michael Douglas.

Claire Danes took the best actress prize for her role in Homeland.

Accepting his first ever Emmy award, Douglas thanked his family and his wife, Catherine Zeta Jones.

The couple, who have been married for 13 years, announced last month that they were “taking time apart”.

“You’re magnificent,” he said, adding: “The only reason I’m standing here is because of you.”

It was the second consecutive Primetime Emmy award win for Danes in the leading actress category for her portrayal of troubled CIA officer Carrie Mathison in Homeland.

She paid tribute to Henry Brommell, one of the writers of the critically acclaimed series, who died in March and received a writing award posthumously during the ceremony.

Her co-star, British actor Damian Lewis lost out in the lead actor category to Jeff Daniels, who was the surprise winner for his role in The Newsroom.

It was the first ever Emmy nomination and win for Daniels, who plays self-righteous news anchor Will McAvoy.

Gunn, who plays Skyler White in the hit show, dedicated the win to her daughters.

British screenwriter Abi Morgan had success with newsroom drama The Hour, claiming the award for best writer in the mini-series or movie category.

In the best comedy actress category, Julia Louis-Dreyfus won her fourth Emmy for her role as the US vice-president in Veep, from The Thick Of It creator Armando Iannucci. She also won an Emmy for Veep last year. 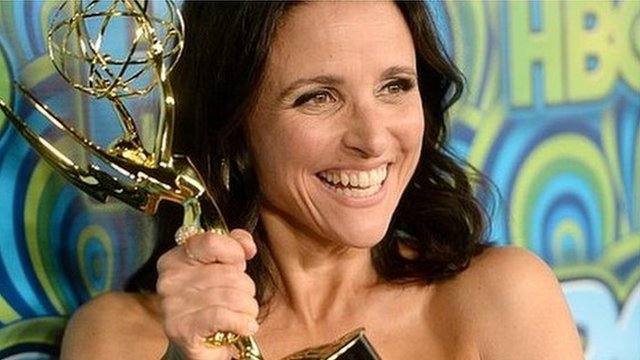 “This is so much good fortune it’s almost too much to bear, said Louis-Dreyfus.

“I’m very grateful to have the opportunity to make people laugh. It’s a joyful way to make a living.”

Jim Parsons of The Big Bang Theory won his third Emmy for best actor in a comedy.

Parsons, who plays Sheldon Cooper in the CBS comedy, scored the hat trick after previous wins in 2010 and 2011.

However several British stars missed out on the big prizes.

Downton Abbey’s Hugh Bonneville and Michelle Dockery went home empty-handed, having been nominated for best actor in a drama series and best actress in the same category. The show was up for 12 Emmys in total but won only one, for music composition for a series (original dramatic score).

Game of Thrones’ Emelia Clarke also missed out, having been up for best supporting actress in a drama. The series went home with no awards despite getting 16 nominations.

The glittering ceremony included a performance by Sir Elton John, who paid tribute to the late pianist Liberace.

Sir Elton, who performed Home Again, said he was “honoured” to have been asked to take part in the ceremony for the first time in its 64-year history.

Among those to receive a special posthumous tribute was 31-year-old Cory Monteith, who died in July of a drug and alcohol overdose.

His Glee co-star Jane Lynch described him as a “beautiful soul”.

“He was not perfect, which so many of us here tonight can relate to. His death is a tragic reminder of the rapacious, senseless destruction that is brought on by addiction,” she said.

The Sopranos star James Gandolfini was also honoured during the ceremony.

The actor, who won three Emmys for his role as a therapy-seeking mob boss in the show, died in June following a heart attack.

Despite being nominated for 17 awards, American Horror Story: Asylum won just one accolade, while the hotly tipped Netflix drama, House of Cards, also took one award for best directing in a drama series for David Fincher.

The political saga, a remake of the 1990 BBC series, earned nine nominations.

US cable and satellite television network HBO led this year’s awards, winning seven Emmys, followed by Showtime with four, ABC and NBC with three each and AMC and Comedy Central with two each.